Established in 1959, the City of Lauderhill, Florida, was built and developed by Herbert Sadkin. Harold Wolk was appointed by the Governor of Florida as one of the first officers of the city, and he later became the first Mayor. Other Council Members included founder Herbert Sadkin, along with Jerome Wolk, David Shapiro, and Nathan Ringler. These men held office until 1965 when the city had its first general elections. The planned name of the community was Sunnydale, however, Sadkin’s friend in New York, helped persuade him to change the name, and together Lauderhill was conceived. In the early years of the community, there were more cows in Lauderhill than people, as many people had little interest in buying a home in “Dairy Farm Country.” The community was designed to be a planned urban development with an innovative housing plan. It became the home of the nation’s first air-conditioned, enclosed shopping mall in the southeastern U.S. in 1966, and the Northwest part of the city was developed as a residential community in the late 1970s.

Today the city continues to grow and change and is home to roughly 67,000 residents in the Fort Lauderdale Metro Area. Offering an abundance of natural beauty, cultural events, arts, and attractions that include professional sports teams and gorgeous beaches, Lauderhill is an excellent choice for prospective homebuyers. Comprised of 7.84 square miles in Broward County, the city encompasses the 33311, 33313, 33319, and 33351 zip codes. There are over 5,000 registered businesses here, employing more than 10,475 people, and the city enjoys convenient access to medical services at the Florida Medical Center. Adding to the allure, particularly for homebuyers with children, the community is served by five elementary schools, two middle schools, and Piper High School.

In a city with so much to offer, Lauderhill real estate is certainly worth your consideration. Homes for sale in Lauderhill include everything from condominiums, apartments, and townhomes to single-family homes, waterfront properties, and luxury estates. Listing prices for Lauderhill properties fall in a broad range and depend on the home’s proximity to the water, age, size, and condition. If you would like to learn more about available homes in Lauderhill, Florida, please allow us to assist you and contact us at your earliest convenience.

This is your opportunity to retire in sunny south Florida with an affordable condo in Lauderhill! 2/2 with updated appliances situated on the first floor of the complex. ...

3/2 is centrally located near the highway, shopping center, and close to the beach. This home has a very spacious layout with a good size master bedroom and a decent size...

This GORGEOUS TRI-LEVEL 3 BEDRM 2.5 BATH TOWNHOUSE makes a wonderful home. Cassa at Georgetown is located in the heart of Lauderhill and features: a community pool, play ...

Lovely updated 2/2 Condo, in the security-manned gated community of Manors of Inverrary. Washer and dryer inside of the unit. Access to pool and gym, and beautiful garden...

This Lauderhill one-story home offers a one-car garage. This home has been virtually staged to illustrate its potential.

The perfect place to call home. Parking is directly in front of the unit. This beautiful Inverlake of Inverrary GOLF condo has been completely renovated. Brand New modern...

DO NOT LOOK FURTHER! VERY WELL MAINTAINED 1 BEDROOM 1 BATHROOM CONDO. ENJOY YOUR BREAKFAST AT SUNRISE WITH A CANAL VIEW FROM YOUR PATIO. THIS CONDO HAS BEEN TASTEFULLY UP...

Spacious Single Family Pool home in great location. Home is in original condition and needs some cosmetic updates. Property features four bedrooms with a den that could...

Get a Home Selling Expert on Your Side

Create Your Own Market Report 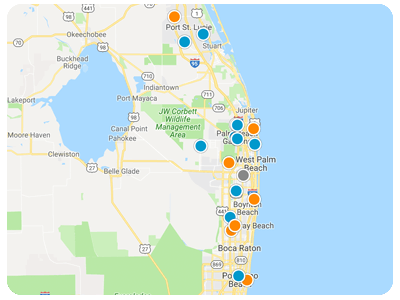